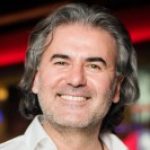 Founder of Hayatın Ritmi, Erdem as a PCC titled coach (Adler) has an over 950 hours of executive & team coaching experience. He uses his Emotional Intelligence (EQAP & EQAC - Six seconds), Gestalt Approach (AoEC) and Body Language – Micro Expressions proficiencies combined with 12 years of managerial and 9 years of entrepreneurship background as effective tools in his coaching, training, and speeches. Erdem is one of Six Seconds Facilitator and Preferred partner of Six Seconds Emotional Intelligence Network in Turkey. He carries out practice on increasing EQ competencies of both people and companies via Six Seconds’ methodology, tools, and assessments. In 2018, he has started to facilitate UEQ, BPC and EQAC Certifications in Turkish. In 2019, he will facilitate for the 2nd time.

After graduating from Middle East Technical University, Business Administration, he was in managerial roles in Teba (1996-1997), Anadolu Efes beverages group (1998-2005), Gilan Jewelry (2006-2009). Then he founded Dymra (2009-2012) with his entrepreneurship and creativity and he succeeds to make the firm market leader.

Hayatın Ritmi is the Turkey preferred partner of Six Seconds. It offers Managering-Team Coaching, Training and Consulting services based on Emotional Intelligence to create positive change on people and companies.

He founded Dymra with his entrepreneurship in 2009. He created an innovative and well-functioning delivering system. After making the firm market leader, he sold his shares in 2012.

He managed the sales and aftersales teams (44 people) as Coordinator in Gilan Jewelry. He built an evaluation system, re-organized the sales processes and achieved to reduce the operational costs. He improved the CRM system. He increased the customer satisfaction at the rate of %100. He cared for the employees’ development.

He worked as National Key Account Manager in Anadolu Efes Beverages Group. He developed sales processes, achieved a phenomenal success while organizing annual agreements. He managed a 45 people team including Regional Key Account Managers, Field Sales, and Merch employees. He performed practices in Merch teams’ working orders and interior administration that provided lasting efficiency. The annual sales figures increased at the rate of &120 during his period of office. He succeeded in organizing wonderful launches and campaigns.

Nothing Found
Welcome Erdem Ercan! Here is your record of Six Seconds' Certifications

NOTE: Cover Photo is the wide image at the top of your profile. It should be a jpg or png image, 1900 pixels wide by 310 pixels tall. If you use a larger image, it will be cut off to this size.